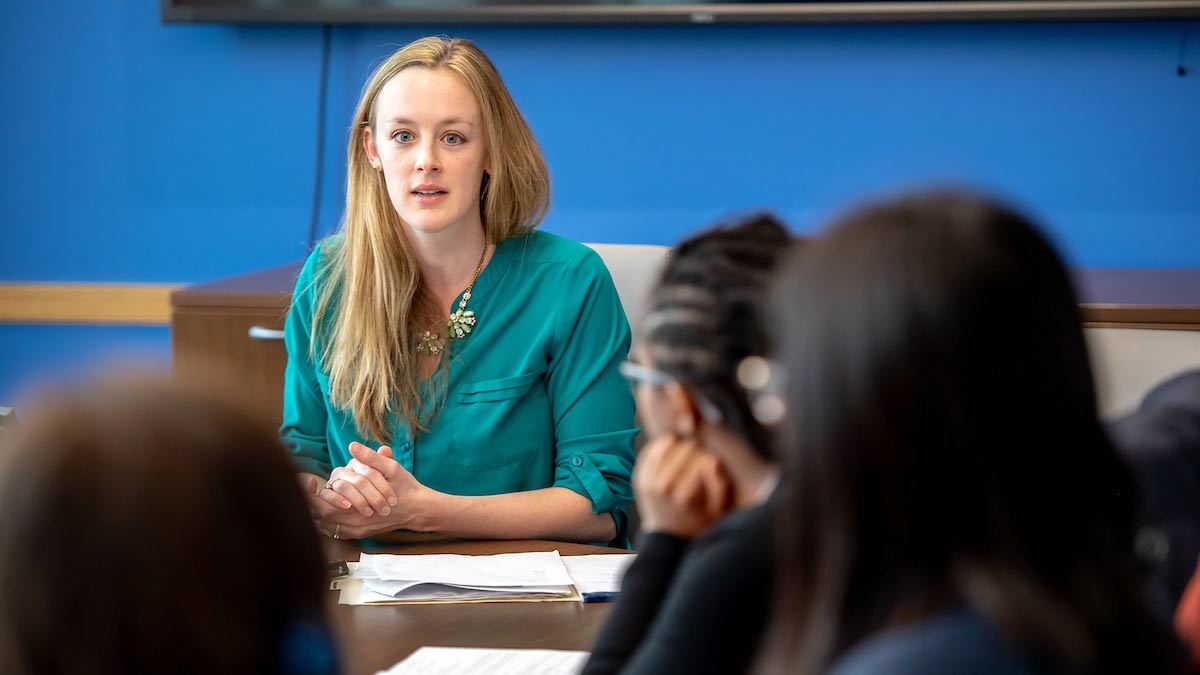 Laura Miller-Graff in the classroom.

How infants adjust in their first months of life depends on many factors, including what their mothers experienced while they are in utero. According to the Centers for Disease Control and Prevention (CDC), 1 in 4 women in the U.S. will experience intimate partner violence (IPV) in their lifetime and that risk increases during pregnancy, but surprisingly few longitudinal studies have been conducted on the effects of IPV during pregnancy.

William J. Shaw Center for Children and Families Assistant Professor of Psychology and Peace Studies Laura Miller-Graff led a novel study examining the role of breastfeeding as a potential protective factor against detrimental outcomes for infants associated with IPV during pregnancy. Miller-Graff and her co-author, graduate student Caroline Scheid, found that breastfeeding through the first six weeks of life acts as a protective factor, effectively negating the risk of IPV the mother experienced during pregnancy on early infant difficult temperament. Poor temperament — from fussiness to being unable to soothe themselves — can be an indicator of adjustment issues in early childhood.

“The current findings suggest continued breastfeeding actually stand to substantially reduce IPV’s intergenerational conferral of risk on infant adjustment,” the authors write in the study that was published  in the journal Development and Psychopathology. “The protective role of breastfeeding is a particularly promising area of intervention given that breastfeeding education and support is already embedded in numerous health systems women might engage with during their pregnancy.”

Earlier research conducted by Miller-Graff and other colleagues showed that, while victims of IPV are not less likely to initiate breastfeeding, they are far more likely to cease the practice in the first few weeks after birth (add link). “Together these studies suggest that providing IPV-exposed women with more targeted breastfeeding support may have important public health implications,” Miller-Graff notes.

The study was conducted in partnership with the South Bend/Mishawaka WIC offices and was supported with grant funds from the Rodney F. Ganey, Ph.D., Collaborative Community-Based Research Seed Grant, an internal Notre Dame award. It involved baseline interviews with low-income women ages 18-39 in all three trimesters of pregnancy. The diverse sample included African-American women (39 percent) and Caucasian women (36 percent) as well as roughly 20 percent Hispanic women and about 5 percent identifying as biracial or multiracial. The study surveys were available in both English and Spanish. Participating women completed surveys during pregnancy and again at their regularly scheduled postnatal follow-up appointments at six weeks and four months. Future studies should include a broader scope of the socioeconomic landscape to determine if the study results would hold outside high-risk contexts, Miller-Graff said.

“While asking women to provide intimate details of their relationships and their babies’ health isn’t easy, Notre Dame partners with a number of excellent nonprofits that provide services for underprivileged women,” Miller-Graff said. “Not all women see themselves as living in a violent relationship. Recruiting for such studies is a delicate and slow process. There are a lot of safety considerations for women, including helping participating women avoid having to explain their participation to a violent partner.”

Miller-Graff emphasizes that IPV screenings are critical for enhancing preventive care for women and their infants and they are covered under the Affordable Care Act. However, she notes that there is little guidance for medical service providers in terms of successfully implementing such screenings.

“Ultimately, evaluating the potential protective effects of short-term breastfeeding may be particularly relevant and may hold high public health significance,” Miller-Graff and Scheid write. “The costs of preventative measures are relatively inconsequential compared to either more intensive parenting interventions in pregnancy or postpartum mental health support for women and children.”